Just like Hip Hop Culture, our project is based on FOUR elements.
These are:


ENABLE THOSE WHO HAVE BEEN LABELLED DISABLED

Through Hip Hop. Through movement. Through Popping dance.
We remix the concept of disability.

Circumstances do not define who we are.
​We are Poppers, we are dancers, we are students, we are movers, we are people.


NO PROFIT OFF OF DISABILITY

All of our weekly classes are and will always be free of charge for participants, as we do not want to profit off of disability.

We only collaborate with people that understand and embrace our core values and our mission.
If you are willing to work hard to become a better person then you rock with us.
​We are more than a family: we are a crew. 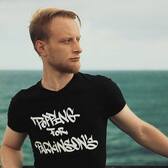 Simone is a dancer, performer, dance teacher, musician, composer and accompanist for dance classes based in London.

Born in Italy in 1992, he has dedicated his life to ​Hip Hop Culture. He has recently received an award from the Universal Hip Hop Museum for his contributions to the community and to the Hip Hop Culture.

Simone's aim was to do something positive for the community and inspire them as much as Hip Hop had inspired him in as a child. He was not satisfied with the Hip Hop scene, mainly focused on battles and contests. He wanted to send a clear message about the many ways in which Hip Hop could be used to help and inspire the communities.

After extensive research on Parkinson's, dance therapy, music therapy and teaching techniques, Simone developed a Popping class made specifically for people with Parkinson's. ​

The first official Popping for Parkinson's class took place back in July 2015 in Wimbledon with the South London Younger Parkinson's Network. Thanks to SLYPN, Simone's dream became reality. Since then, he taught classes all over the world.

Popping For Parkinson's is now officially in the Universal Hip Hop Museum Hall Of Fame, the most prestigious award in the Hip Hop culture.

Simone holds a BA Degree in Contemporary Dance from Trinity Laban Conservatoire of Music and Dance in London. He is now doing an MSc in Dance Psychology at the University of Hertfordshire, looking at the scientific relation between Dance and PD.

​There is still no cure for Parkinson's, so a key aspect of this project is making students feel more comfortable with themselves, ultimately aiming at a better quality of life.